Eagle Nursed Back to Health, Released

An adult female bald eagle took flight Friday morning from the Sundial Bridge in Redding after more than four months of rehabilitation a the California Raptor Center in Davis. The eagle was found in a roadway about 20 miles south of Red Bluff April 9. It was badly injured after being hit by a car.

The California Department of Fish and Wildlife took the bird, with a fractured left claw and shoulder, to a local veterinarian, who referred it to the University of California, Davis Veterinary Medical Teaching Hospital. It then underwent rehabilitation through the university's California Raptor Center.

"To treat the eagle, U.C. Davis veterinarians worked with Cook Medical, which donated a device known as Small Intestinal Submucosa Extracellular Matrix that was used to heal the eagle's flesh wounds that accompanied its fractures," said the university's Rob Warren in a statement.

Cook's Joe Obermiller said a tissue scaffold, made using collagen harvested from a pig, was used to treat the bird.

"That's the closest you'll ever come to seeing a pig fly," Obermiller quipped.

Raptor Center volunteer Larry Guenther, of Davis, released the bird. He said she had been flying for about two weeks and he was happy to see her with a strong wing beat and her feet tucked up as she flew south along the river from the bridge.

"That is one of the best things about working at the raptor center is releasing a bird," Guenther said.

Birds that are expected to be released back to the wild are not given names, he explained. Center manager Bret Stedman said the bird was at least 4 years old due to her markings. The bird was fitted with a metal U.S. Fish and Wildlife Service band so it could be identified if found again.

Stedman said the center takes in a bald eagle about once every other year, but it was rare to see one with such extensive injuries. The bird was a bit disoriented, Stedman said, but showed strong flight and has a good chance at survival. The date and location of the release was set before Stedman learned the exact location where the bird was found. But he said eagles can cover that distance in an hour or two and he had no reservations about releasing the bird in Redding.

The California Raptor Center at U.C. Davis is an educational and research facility dedicated to the rehabilitation of injured and orphaned birds of prey. The center takes in more than 200 sick injured, and orphaned raptors each year, successfully returning about 60 percent to the wild. The center also provides hands-on training in the care and management of birds of prey to those interested in rehabilitation, and offers educational programs to schools, ecological and environmental organizations and the university community. 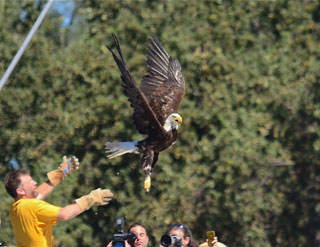