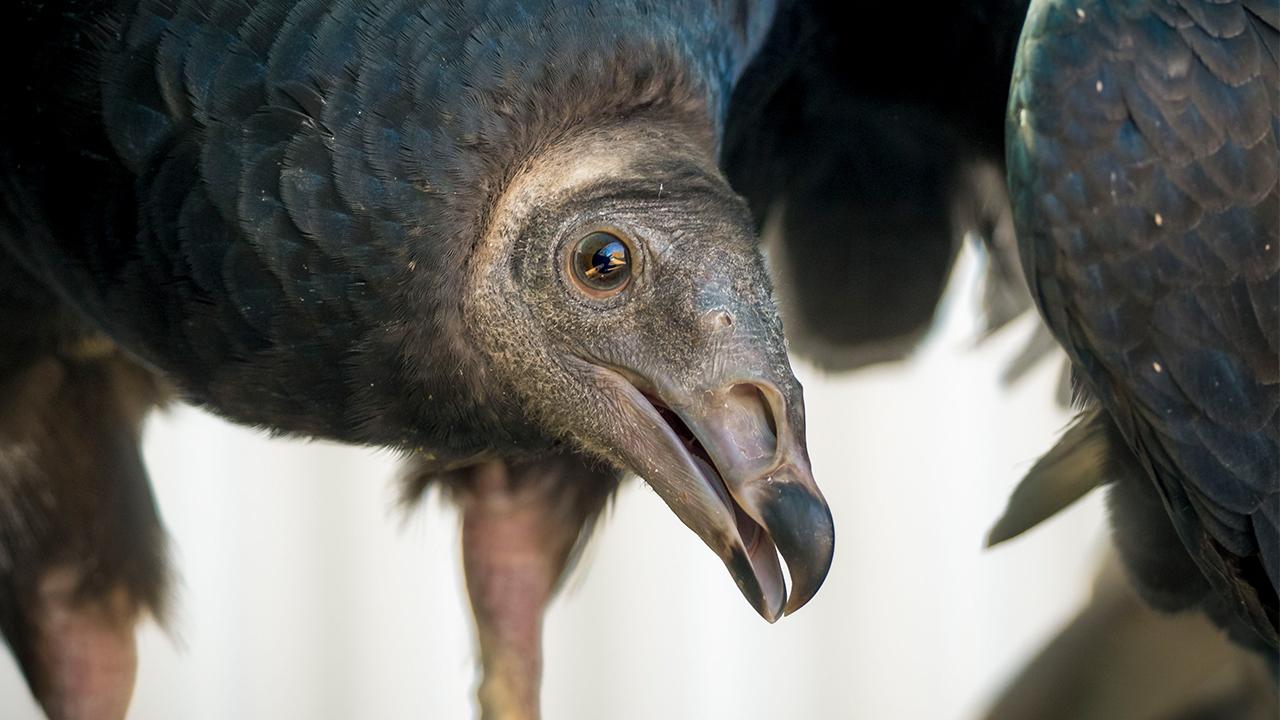 Hence it was with much surprise that California Raptor Center staff and volunteers found themselves caring for not one, but three baby Turkey Vultures over the summer of 2019.

The first two Turkey Vultures, presumably siblings, were brought to the CRC at the end of May after being transferred through two other local wildlife rehabilitation centers. It is unknown how or why the babies ended up in the possession of a human. Details of the original “rescue” are hazy; it seems that the finder intended to keep both siblings as pets until talked out of it by an acquaintance or convinced to surrender the birds. Whatever the case, the Turkey Vultures had clearly spent time in the care of their “rescuer” followed by another few days being transferred between wildlife centers before they finally landed at the CRC. The duo was estimated to be approximately 19 days old when they arrived.

CRC staff knew they had a challenge on their hands. Turkey Vultures are notoriously prone to imprinting on humans: not only can they imprint by sight and sound, but their excellent sense of smell allows them to imprint by odor as well. Because of the way the two babies were inappropriately handled when first found, coupled with how long they spent in human care before reaching the specialized CRC nursery, both birds were already imprinted on humans when they arrived. Staff knew that getting them to be releasable and wild again was a long shot, but that the CRC could offer them the best chance possible – with a little help from one of the CRC’s permanent residents. The young duo was immediately placed in a quiet, behind-the-scenes, hands-off cage with Juliet, the CRC’s adult female turkey vulture, as a last ditch effort to try to wild them up.

No one knew how Juliet, who has lived at the CRC since 1993, would respond to the sudden arrival of two chicks. Would she interact with them? Did she know to be gentle? Would she feed them? CRC volunteer Diana Muñoz rigged up a “baby monitor” camera that allowed staff to remotely watch Juliet’s interactions with the chicks.  To everyone’s relief, Juliet proved to be a good first-time foster mother. Though she was never seen feeding the chicks – they could self-feed and did not need her help – she preened them, spent time with them, and demonstrated typical vulture behaviors.

Later in the summer, a third, unrelated turkey vulture chick joined the foster family. This third chick was initially brought to the Lindsay Wildlife Experience in Walnut Creek. Knowing that the CRC had two chicks of a similar age with a foster mother, Lindsay Wildlife staff transferred the chick to the CRC so that it could grow up in the company of other Turkey Vultures. It joined Juliet and the duo with no problems, smoothly integrating into their “flock”.

The third chick, which had been handled appropriately by its finders, ended its stay at the CRC with a successful release into the wild. However, for the two original siblings, release was not a safe option: despite Juliet’s modeling appropriate behavior, and despite the best efforts of CRC staff, the siblings remained too imprinted to be released into the wild. In the CRC’s large flight cage, they would not retreat from humans and instead approached on the wing and by foot – behaviors that could put them, and unsuspecting people, at extreme risk in the wild.

But with those behaviors and the birds’ non-releasability came a unique opportunity. The CRC had not had a glove-trained Turkey Vulture since 2015, and the two siblings, inquisitive and motivated, were ideal candidates to fill that role. They are now in training to become educational ambassadors, and they are performing some first-time feats at the CRC: both birds fly to their trainers’ gloves, which will allow us to showcase the incredible wingspan and flight abilities of vultures. Be on the lookout for the Turkey Vulture duo soaring into future education programs and Open Houses!

The two new Turkey Vulture ambassadors can currently be viewed in South Flight, the large white building near the museum.

Little Bird in a Big Building: An American Kestrel Flies Free After A Week Trapped Indoors